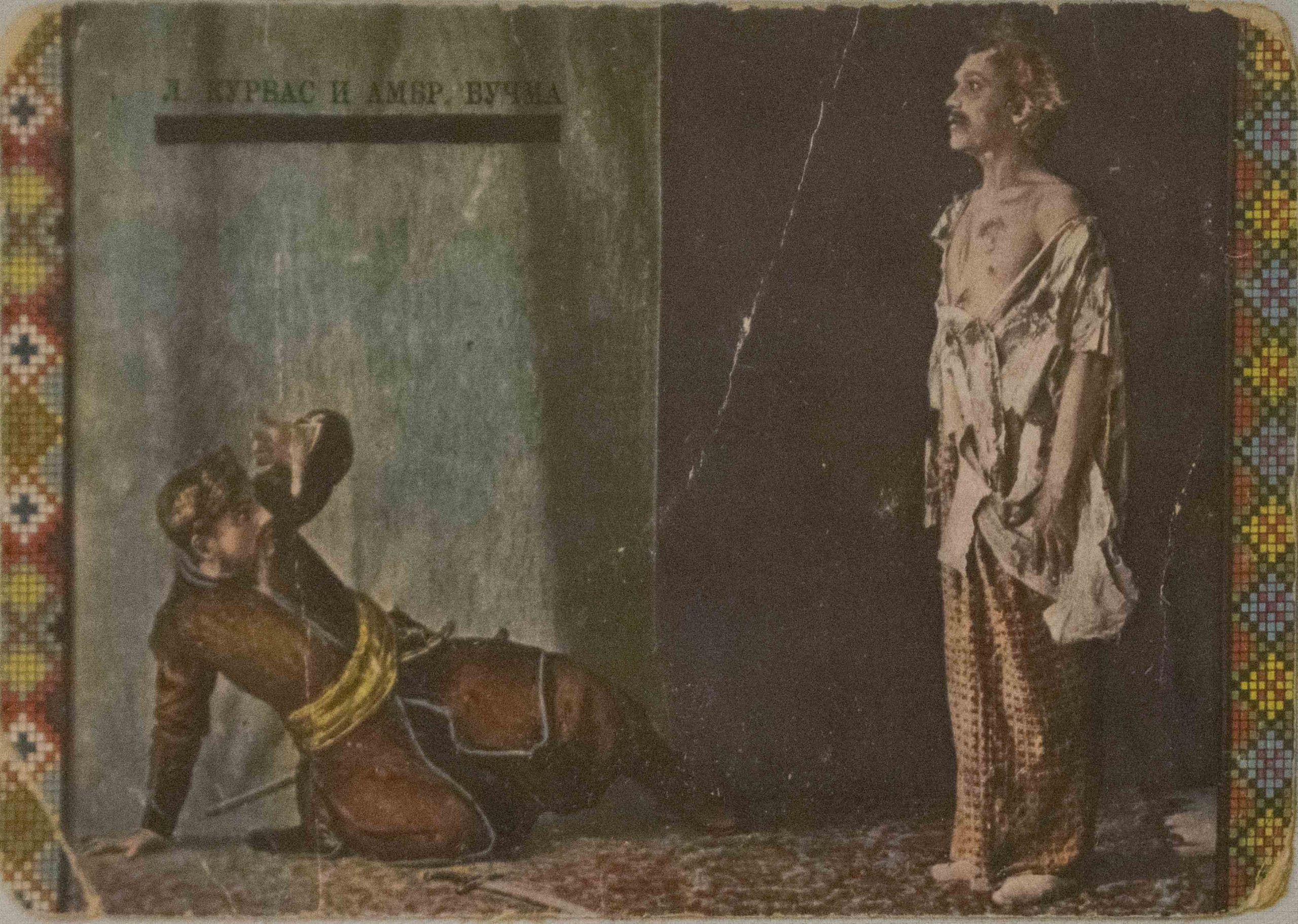 As Iryna Volytska wrote, “The two years (1912–1914) Les Kurbas spent with the Ruska Besida traveling theater, directed at the time by Yosyp Stadnyk, were a productive school of his professional skills.” Ruska Besida can also be called the theater where Les Kurbas was born, literally. His parents, Stepan (Kurbas) and Vanda (Teicher) Yanovych, were actors with the group, and their first child, Oleksandr-Zenon, was born during their tour in Sambir.

This first professional Ukrainian theater in Galicia was established in Lviv in 1864 under the auspices of the Ruska Besida Society. It was organized by socio-political and cultural figures Yu. Lavrivskyі and O. Bachynskyi. It opened on March 29, 1864 in Lviv with Marusia, a play based on the novel by Hryhorii Kvitka-Osnovianenko.

After their first successful performances in Lviv, the troupe toured cities and towns in Galicia and Bukovyna. Its repertoire consisted mainly of Ukrainian plays, including local authors, as well as Western European classics. Ideological differences between two intelligentsia groups in Galicia – the Narodnyks (national populists) and the Moscophiles – had a negative impact on the theater’s activities and led to the temporary decline of the Ruthenian People’s Theater (the name by which the group is most often referred to). For a while there were two Ukrainian troupes in Galicia with different ideologies: one led by O. Bachynskyi and the other by A. Molentskyi.

In 1874-1880 the theater was run by Teofiliia Romanovych. The troupe included: M. Romanovych, I. Hrynevetskyi, A. Liudkevych, and others. In 1875 T. Romanovych invited M. Kropyvnytskyi to join the theater as director and leading actor He raised theater in Galicia to a much higher level. In the early 1880s the theater’s repertoire expanded significantly, with the addition of historical plays and musicals. Subsequent artistic directors I. Biberovych and I. Hrynevetsky tried to enrich the repertoire with works by Ukrainian playwrights, such as I. Kropyvnytskyi, M. Starytskyi, and I. Karpenko-Karyi. The leading actors at this time were K. Pidvysotskyi, S. Yanovych, S. Stefurak, and others.

Ivan Franko devotes a lot of attention in the 1890s and 1900s to the problems and prospects of the development of theater in Galicia. Ruska Besida stages his plays, with the first performance of Stolen Happiness in 1893. Significant changes in the theater’s activities took place in the early 1900s when a new generation of directors and actors joined the troupe: Y. Stadnyk, I. and K. Rubchak, A. Nyzhankivskyi, F. Lopatynska, and others. A notable milestone in Ukrainian Galician theater was the leadership of the troupe by M. Sadovskyi and the Galician tour by M. Zankovetska (1905-1906).

In 1906-1913 the troupe was headed by Y. Stadnyk, who wanted to invigorate the theater by staging popular works: Ukrainian and foreign classics, plays by Chekhov, Gorky and Tolstoy, musical performances. The troupe is joined by young actors: A. Buchma L. Kurbas, S. Semdor, S. Stadnykova, H. Yura, V. Yurchak.

Les Kurbas made his deputy on the stage of Ruska Besida playing the roles of Hirei and Potap in M. Starytskyi’s Marusia Bohuslavka and Oh, Hryts Don’t Go. In 1913, Kurbas played Mykhailo Hurman in Stolen Happiness. This new version of the play (with uncensored text) was shown during the celebration of the 50th anniversary of the theater. Les Kurbas’s notable roles in foreign plays were Mykola (Autumn Storm by Ivo Vojnović) and Dr. Astrov (Uncle Vanya by Anton Chekhov). But his most talked about performances were in modern Ukrainian plays: Sun of the Ruin by Vasyl Pachovskyi (Hetman Petro Doroshenko) and Black Panther and White Bear by Volodymyr Vynnychenko (Kornii).

After the outbreak of World War I, the Ruska Besida Theater ended up in a war zone and was forced to cease operations because the troupe ended up on different sides of the front. The actors scattered to different theatrical groups. Some joined Les Kurbas’s new theater – Ternopil Theatrical Evenings. Later some of the artists joined the Ukrainska Besida Theater, which was active in Lviv until 1924.