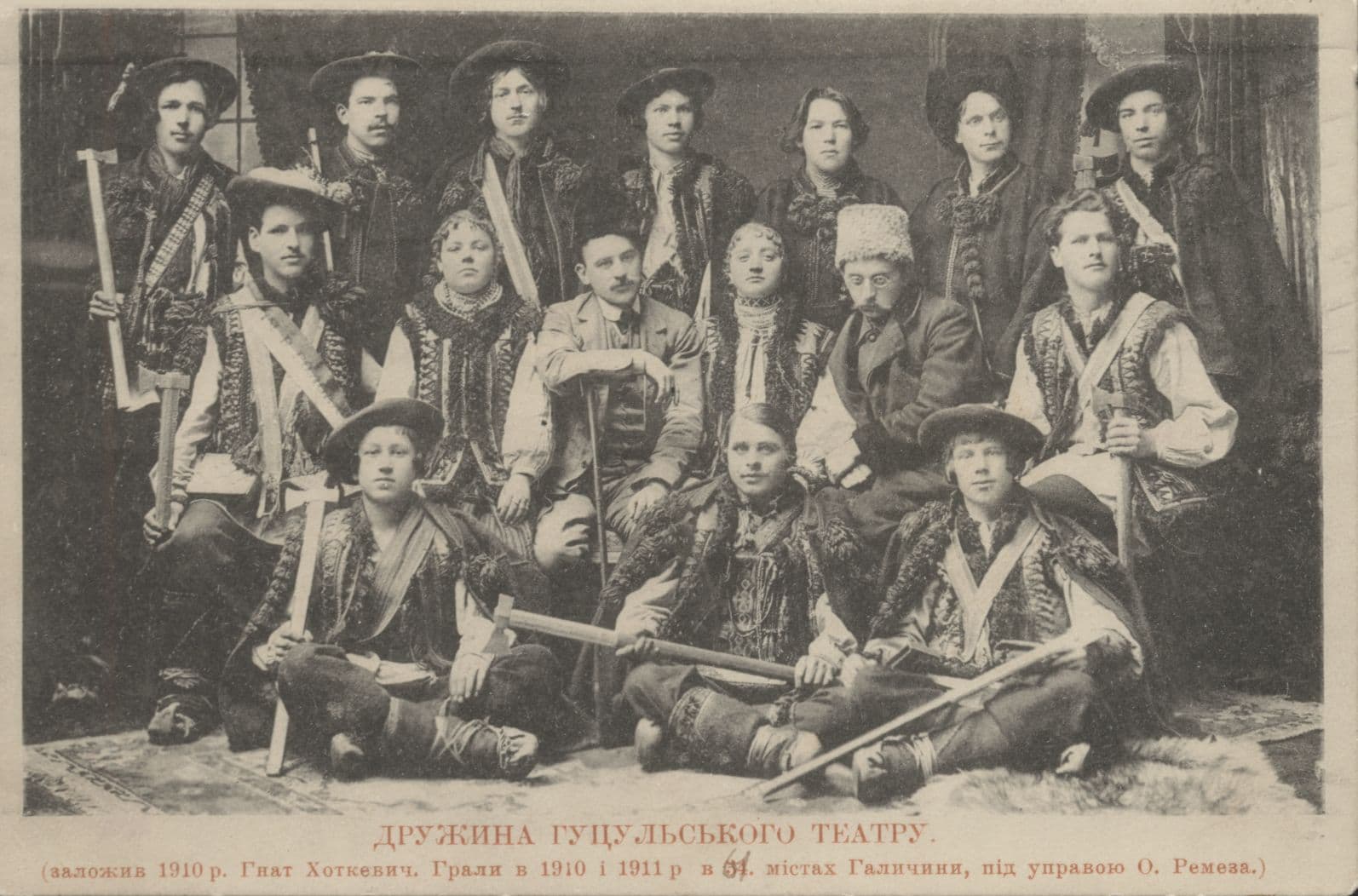 The culturally unique Hutsul Theater was organized in Lviv by Hnat Khotkevych – a poet, writer, playwright, historian, folklorist, musician and public figure from the Slobozhanshchyna region of Ukraine who emigrated from the Russian Empire for political reasons. There he became friends with the famous ethnographer and folklorist Volodymyr Hnatiuk, whose research inspired Khotkevych. In 1910 he created the amateur Hutsul Theater company in Krasnoillia village in the Hutsul region (today Ivano-Frankivsk oblast). His first show was an adaptation of Polish playwright Józef Korzeniowski’s Verkhovynians (original title Krakowians and Highlanders) called Antin Revizorchuk.

After successful performances in the Hutsul region, the theater begins touring and becomes a professional company. In the first half of 1911 they give performances in Lviv, Krakow, Chernivtsi, Kolomyia and other towns in Galicia and Bukovyna. After the long tour, Khotkevych expanded the troupe, organized a Hutsul orchestra, and staged premieres of his plays Dovbush, Hutsul Year and Uneasy.

According to researchers, Kurbas and Khotkevych met in Lviv in 1909. Les Kurbas first joined the Hutsul Theater as a guest artist and later became an administrator. In May 1911 he played Antos Revizorchuk, filling in last minute for the sick Mykhailo Sinitovych. This performance can be considered Les Kurbas’s professional debut, as prior to then he had only performed in amateur shows.

Les Kurbas became the administrator, essentially fulfilling the role of managing director, of the Hutsul Theater in late 1911. Khotkevych invited him for six months to replace another political émigré writer – Oleksa Remez – who was unable to participate in preparations for the tour. Remez and Kurbas co-directed the six-month tour by the Hutsul Theater from November 1911 to April 1912, which took place without Khotkevych. The tour proved to be very difficult organizationally, materially and artistically, as evidenced from Kurbas’s letters to Khotkevych. Kurbas left the Hutsul Theater after the tour and soon joined the Ruska Besida Theater.

In the absence of Khotkevych, lead actor Yosyp Huleichuk took charge of the Hutsul Theater’s tours in April 1912. The following year the theater began preparing for performances in Naddniprianshchyna Ukaine, as well as Moscow and Odesa. In March 1914 the Hutsul Theater concert group put on Hutsul Evening in Kharkiv, after which the artists left for Moscow. In July 1914 the Hutsuls also performed in Odesa. The Hutsul Theater disbanded after World War I broke out.

Les Kurbas’s time with the Hutsul Theater was more than a just learning experience in how to organize an artistic company: the Hutsul Theater was unique for its combination of folk culture, authentic Hutsul folklore and ethnography, and the modern artistic approaches of its directors. Creating modern avant-garde performances based on archaic sources would be one of Kurbas’s artistic principles as a director.